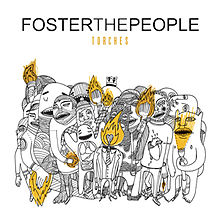 Torches is the debut studio album by American indie pop band Foster the People. It was released on May 23, 2011, on Columbia Records and Startime International in the United States.

In 2010, the group parlayed the popularity of frontman Mark Foster’s song “Pumped Up Kicks” into a record deal with Startime International and wrote the album to back up the song’s popularity. “Pumped Up Kicks” proved to be a sleeper hit; after receiving significant airplay on modern rock stations, the song crossed-over onto contemporary hit radio and became one of 2011’s most popular songs. Four additional singles were released from the album: “Helena Beat”, “Call It What You Want”, “Don’t Stop (Color on the Walls)”, and “Houdini”, which had previously been released as a promotional single in the United Kingdom prior to the album’s release.

Torches received generally favorable reviews from critics and was nominated for the Grammy Award for Best Alternative Music Album. The record peaked at number eight on the Billboard 200 in the US and number one on the ARIA Albums Chart in Australia. It has been certified platinum in Australia, and gold in the US, Philippines, and Canada.