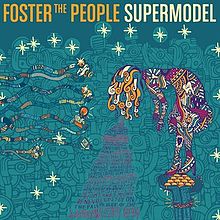 Supermodel is the second studio album by American indie rock band Foster the People. The album was co-produced by their frontman Mark Foster and British musician Paul Epworth, and was released by Columbia Records on March 14, 2014 in Friday-release countries and March 18, 2014 in the United States. It is the follow-up to the band’s 2011 debut album, Torches.

A concept album, Supermodel features common and heavy themes of negativity towards modern popular culture and consumer ideology throughout the record and its related artworks. Conceived mostly by Foster, the album deals primarily with social issues and “the ugly side of capitalism”, and is described by Foster as “a conversation with God. Trying to explore who God is.” Recorded and produced throughout 2012 and 2013, the album also features a minor departure from the sound of Torches, importing instruments and various sounds of different cultures of the world while retaining the “perfect pop record” sound.

The album was heavily promoted by the band and Columbia Records in the lead-up to its release, with an accompanying documentary series of the same name and a 130-foot mural painted in Los Angeles, the largest on the West Coast of the United States. The album was preceded by three singles released by Columbia in 2014: “Coming of Age” released in January 2014, “Pseudologia Fantastica” in February, and “Best Friend” in March.